Part Two: Reindeer Lore and History for Those Who Want to be in the Know!

As we found out in part one, reindeer are pretty amazing creatures and extremely well adapted for living in the north. Now let’s talk about the legends, lore, and history of reindeer and their connection with Christmas and Santa.

When exactly did folks start connecting Santa with reindeer? Remember, the evolving story of St. Nicholas/Santa Claus goes back to what was once the Roman Empire in 270 CE. There were probably not a lot of reindeer running around in what is now Turkey, even in ancient days.

We do know that reindeer were a very important part of nomadic cultures, northern countries, and every culture that hunted and domesticated them. Reindeer are important parts of ancient spiritual traditions in those tribal cultures. There are rock carvings of reindeer dating back to 4200 BCE in Norway. And the “Flying Reindeer” carvings (also known as the Deer Stones) date back to 1000 BCE in Mongolia and Siberia. Reindeer are still important in many indigenous cultures in the northern part of the world, such as the Sami in Norway, and nomadic cultures in Siberia.

Christmas traditions are often a hodge-podge—a snowball that picked up various things as it came through cultures and times. If you lived up north, sleds and sleighs are very efficient and make a lot of sense. Northern animals have evolved to handle the extremely tough environment, so feeding them and keeping them is more practical.

St. Nicholas of Myra probably got around mainly on foot and likely used pack animals (donkeys, mules, and horses). As the legend of St. Nicholas went through time, we see stories of various Christmas figures using horses and donkeys. In Italy, it’s Dominic the Donkey (according to the popular song). On a Sunday in the middle of November, St.Nicholas or Sinterklaas arrives in Amsterdam, Netherlands, riding his faithful white horse Amerigo.

For a long time, Father Christmas is depicted on horseback, and even occasionally a giant ram, Julebokk, or driving a wagon or cart pulled by horses. The Russians have Ded Moroz, aka Grandfather Frost, seen driving a Troika pulled by three racing stallions (usually drawn flying in a stylized fireball) because Russians are just cool that way.

Then in 1821, an anonymous Christmas poem was published called, “Old Santeclaus with Much Delight.” The name of the author is not known. The poem had eight illustrations and was one of the first examples of lithography in the U.S. Lo and behold: Sante Claus is on a rooftop with a sleigh and one—count them, one! non-glowing-nosed but probably flying reindeer!

If you look at the illustration, the artist really has no idea what a reindeer looks like. Get used to that. Remember, if you want to make something magical, just pick something that not a lot of people have seen firsthand but they have heard of. The poem also helps establish Santa arriving on Christmas Eve, Santa dressing in red, and Santa filling stockings.

This poem is in a paperback book published by William B. Gilley, The Children’s Friend: A New-Year’s Present, to the Little Ones from Five to Twelve.

It was published in the same city as the seminal fantasy book, “Knickerbockers History of New York,” written by Washington Irving (one of America’s first successful fantasy writers). That was published much earlier, in 1809. In that book, St. Nicholas is seen piloting a flying cart, but it does not specify what is pulling it.

“And the sage Oloffe dreamed a dream,—and lo, the good St. Nicholas came riding over the tops of the trees, in that self-same wagon wherein he brings his yearly presents to children”

Both of those books probably directly influenced the writing of one of the most famous poems ever written, “A Visit from St. Nicholas,” also popularly known as, “The Night before Christmas,” published anonymously in 1823. This poem is a brilliant example of social engineering that helps re-invented Christmas to what we know today. And that’s where Santa’s reindeer really get some traction, so to speak.

“Now Dasher! Now Dancer! Now Prancer! and Vixen!
On Comet! On Cupid! On Dunder and Blixem!

For a moment, let’s chat about those last two names.

Originally written as Dunder and Blixem (an attempt at Dutch), the names changed to Donder and Blitzen (German), and then what we know today, Donner and Blitzen. All of these names translate to thunder and lightning. This gives a symbolic nod to two Norse myths. First, Odin flying around on winter solstice with his eight-legged steed Sleipnir (“eight tiny reindeer”?). And secondly, our friend Thor, who rides around in a flying iron cart, smiting giants with his hammer Mjolnir. In Norse tradition, when you saw lightning, that was Thor smiting giants and trolls (it looked like lightning bolts) and rolling away in his iron cart (it sounded like thunder). He has two tough rams, named Tanngrisnir (Old Norse for “teeth-barer, snarler”) and Tanngnjóstr (Old Norse for “teeth grinder”) or Snarler and Grinder. That’s right, Thor was the original “Ram-Tough.”

Using some brilliant rhyming in anapestic tetrameter, “The Night Before Christmas” pretty much permanently joins St. Nick with his reindeer (and eight of them at that).

Santa has been seen being pulled by other creatures, of course. In Cajun country, it’s eight big alligators, in the Old West eight snarly long horns steers, and in Australia it’s either six or eight snowy white kangaroos or “boomers.” 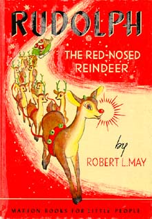 And then came Rudolph.

The original story-poem written by Robert Lewis May in 1939 was an assignment he wrote for Chicago-based Montgomery Ward. It was a hit and they gave away 2.4 million copies! In a rare act of generosity, Montgomery Ward gave the copyright (it was a work for hire) back to the struggling May, in 1947.

Written in anapestic tetrameter (see the connection?), Rudolph is essentially an “Ugly Duckling” story. The author almost used other names rather than the now famous German name, “Rudolph.” Can you imagine Rollo or Reginald the Reindeer?

In a bit of magical coincidence, May’s brother-in-law was none other than the famous song writer, Johnny Marks, one of the best Christmas music composers in history. Even though he was Jewish, Johnny gave us Rockin’ Around the Christmas Tree, Holly Jolly Christmas, and many other great Christmas songs! 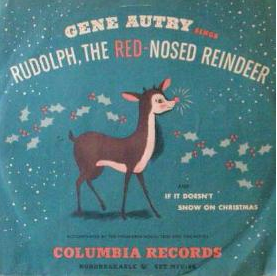 Johnny Marks composed the song, “Rudolph the Red Nosed Reindeer.” Even though Gene Autry originally rejected it, even as a B side, his wife convinced him to use the song. She knew a hit when she heard one. And on Christmas 1949, it became the number one song in America. It has since sold 150 million copies. Rudolph and the “famous eight” reindeer have been stars of song, stage, and screen ever since. By the way, “Rudolph” the song is still copyrighted and his image trademarked to this very day.

As we can see, reindeer are amazing creatures, and have a long history helping mankind, elfkind, and Christmas Performer Kind. Stay tuned for more articles on Christmas related topics!

Many thanks to the reindeer breeding community and to Lone Beate Ebeltoft for their contributions to this article.

If you are looking for a great book to read up on reindeer info, I heartily recommend “Reindeer, an Arctic Life” by Tilly Smith, ISBN 9780750987974. It is a reprint of “The Real Rudolph, A natural history of the Reindeer,” published in 2006.

If a group of Christmas Performers want to visit Norway and Lapland for a real reindeer and a unique Christmas Experience, check out https://tromsoarcticreindeer.com/ and https://santaclausvillage.info/ and let us know!